The Turkey Creek Volunteer Fire Department was organized in September 1974 and incorporated and charterd by the State of North Carolina. At this time Sneads Ferry and Holly Ridge areas had an established fire department and were providing fire protection for the Turkey Creek, Folkstone and Thomas Landing areas. After much discussion and concern by community members, it was decided to form a fire department for this community.

There were approximately 15 members that initially organized what is known as Turkey Creek Volunteer Fire Department Inc. With much enthusiasm the first "fire department meeting" was held in Larry Parker's garage. The first order of business at this meeting was to elect our first slate of officers, and to form a committee to check into incorporation and to locate our first piece of firefighting equipment. Sneads Ferry Volunteer Fire Department was very helpful in helping organize our department. The first set of by-laws and constitution were drafted by their organization. They also donated our first truck which was a 1951 converted oil tanker.

Our department held its first training session in early 1975 and graduated 19 members in a basic firefighting course. Plans were started that year to erect a building to house our second piece of firefighting apparatus which was purchase from Teachy Fire Department. A loan was obtained at this time for $10,000 with which to build the building that now stands and is currently our Station 1. A piece of land donated by Mr. M.F. Duff was surveyed and the foundation was begun in late 1975.

Sneads Ferry VFD donated our first alerting system which consist of an audible warning device. This siren severed its purpose until 1978 when we installed the Thunderbolt Alerting System. In 1977 Onslow County donated the department a 1977 Class A Pumper. This truck was delivered in April 1978, which brought our firefighting arsenal to 3 pieces of equipment. As of this time the membership of the department had more than doubled to about 32 members.

The need now was recognized for some type of vehicle that was capable of suppressing woods fires. After much discussion it was decided to locate and purchase a 4 wheel drive vehicle. This piece of equipment was found within the county surplus system. The vehicle that was identified as 1809, and was donated by Onslow County. After much work the truck was painted and portable slide-in unit was purchased for $3000. The department and community continued to grow and the time and need had arrived for the department to consider purchasing a tanker that would be capable of supplying the other trucks with water. At this point, after much discussion and planning a 1983, 1250 gallon, jet-dump tanker was purchased from Atlas Fire Equipment Company for $52,000.

Now Turkey Creek Fire & Rescue has district has nearly doubled in sized. The department currently has three stations in the district for response. The original Turkey Creek Fire Department building off Tarlanding Rd is now Station 1. The old Sneads Ferry Fire Department building is now Station 2.  The old Sneads Ferry Rescue Building is now Station 3. We currently have an arsenal of 3 Engines, 2 Tankers, 2 Brush Trucks, 1 Rescue, 2 First Responder, 2 Water Rescue Boats, and administrative vehicles. Turkey Creek Fire & Rescue takes part in many community activities and works closely with the Sneads Ferry Community Council. Our department has some of the best dedicated volunteers your can find. We are always welcoming new members to join our department. If you would like to join our team please contact us. Our department is here to support the community.

Looking back and realizing that much has been accomplished the road ahead still present many hurdles to be overcome. As our community grows the fire department roles in the fire suppression and the basic well-being of our community lies on the shoulders of our organization. Our community in the past has demonstrated its willingness to stand by one another whatever the hurdle may be. We ask your continued support as we try to meet the increasing needs of the community. We believe that whatever is accomplished within our fire department will be done by the dedication of this community and by the Grace of God! 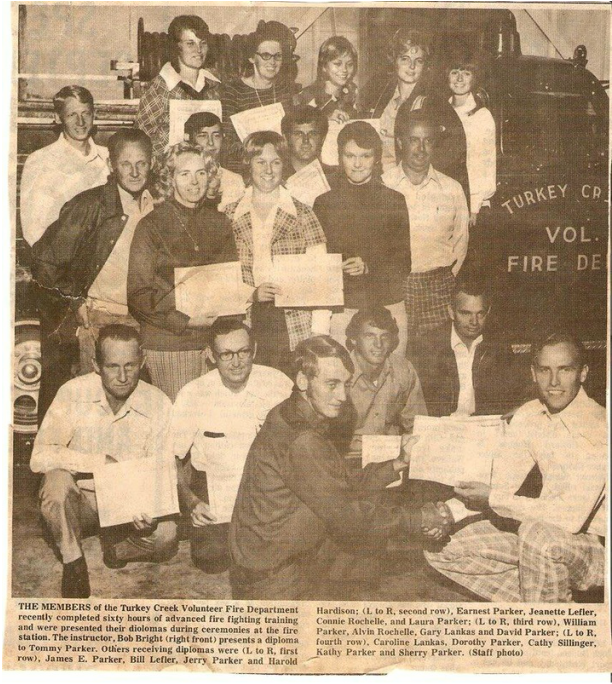